The Guesthouse is a Cork Artists Collective initiative that began in 2004 in collaboration with the Cork City Council and with the support of the Arts Council of Ireland.

An old guest house called Shandon House located in the cultural quarter of the city was purchased by Cork City Council and entrusted to the C.A.C. to begin a new visual arts initiative in 2004. The process of developing ideas for how this building could be reimagined began by inhabiting the building with numerous artists’ projects, experiments and collaborations, the building became a testing site for potential activity that was to inform a plan for its renovation that began in 2006.

After completing the renovation in collaboration with the Cork City Council The Guesthouse Project was set up and officially launched in 2009.

The Guesthouse Project was developed as a creative initiative and experiment in itself and run on a voluntary basis by artists from different areas of the arts that are actively engaged with experimentation and interdisciplinarity.

The Project responded to the need for visiting artists to work and stay in the city and to create another type of work space and social space to support collaboration, conversation and cross-practice exchanges.

Our focus was to preserve the residential and domestic nature of the house in which the visiting artists in residence is central and the kitchen and open events are a key gathering point. The project continues to evolve in response to artists and a changing arts environment. 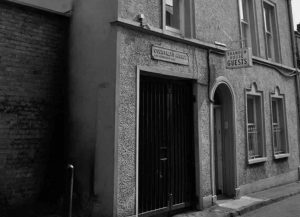