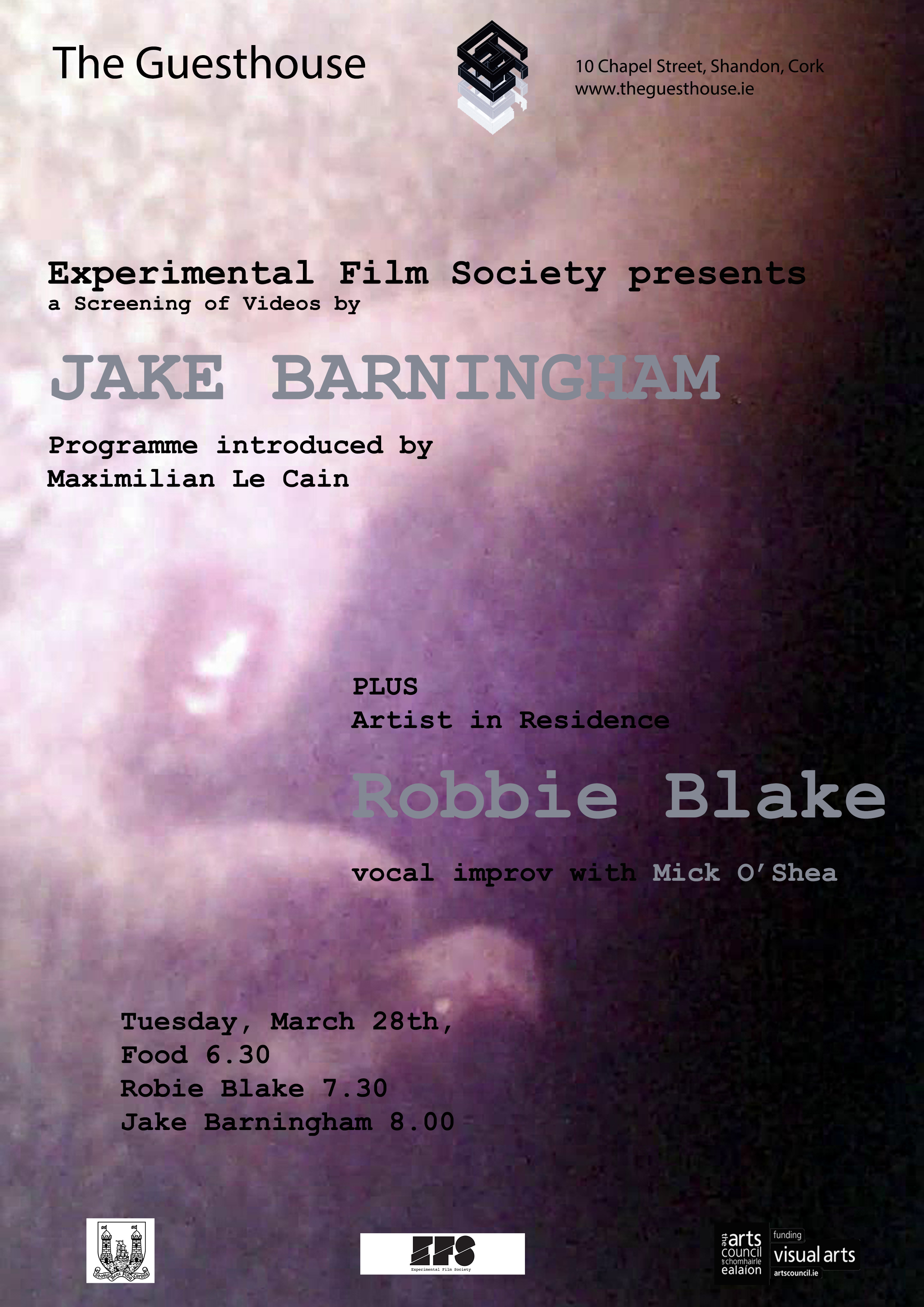 Experimental Film Society presents a Screening of Videos by JAKE BARNINGHAM   Tuesday, March 28th, 8pm The Guesthouse, Cork Programme introduced by Maximilian Le Cain     Experimental Film Society is delighted to present the first Irish screening of experimental video artist Jake Barningham at The Guesthouse. EFS has long admired Barningham’s distinctive and haunting work with the unique textures of video that opens a ghostly space between representation and an abstract zone of electronic visual echoes. Through focusing on the raw surfaces of degraded video imagery, he dissolves details of the material world into indistinct traces occupying a mysterious afterlife of electronic dematerialisation.   “Barningham’s videos strike me, first and foremost, as studies on absence. While none suggest a narrative, in each there is a hint of an image, something almost, barely tangible, that ultimately remains elusive and transient… Yet these pixels almost ‘gather’ themselves, as if attracted to the image and attempting to ‘fill it’ in. But repeatedly, the pixels break down and scatter. While the image is partially defined by that which it is lacking – a specificity of sorts, Barningham also invites us to view the breakdown as something worthwhile in-and-of itself, as moments of pure movement, abstracted motion, the pixels themselves as unique sculptural objects.” – Daniel Gorman, Videos by Jake Barningham   “I conceive the unseen world of video as a lush garden. My work isn’t image “making,” it’s almost conjuring, almost gardening. We should come up with a completely different vocabulary for this as far as I’m concerned. I’m not an editor; I’m a landscaper or a video-scaper. This is the totality of my conception of video. I want to build a palpable world for people’s thoughts to exist in. I want it to be so crystal clear that you can nearly touch it, smell it.” – Jake Barningham   concerning flight, 2010, 2min ok, 2010, 2min giving, taking, 2010, 1.5min paper, 2010, 2min western, 2011, 3.5min silence, 2011, 2min color copy, 2011, 3min